Number 1 of the year 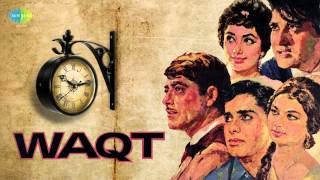 Lala Kedarnath Prasanta (Balraj Sahni) has three sons whose birthdays are on the same day. On the occasion of their birthday celebration, as he is proclaiming his grand plans for the future to his wife (Achala Sachdev), there is a sudden earthquake and the whole town crumbles. When Lala Kedarnath regains consciousness, his house has been destroyed and his family is gone.

The oldest son, Raju, (Raaj Kumar) ends up in an orphanage, while middle son, Ravi, (Sunil Dutt) is found on the road by a rich couple who take him to their home to raise him as their own son. The youngest son, Vijay, (Shashi Kapoor) who is still an infant, is with his mother Laxmi (Achla Sachdev). Laxmi and Vijay live in poverty.

Lala Kedarnath traces Raju to the orphanage but comes to know that he has run away because the orphanage manager (Jeevan) beat him up. In anger and frustration, he kills the manager and is jailed.

Raju grows up as Raja, a sophisticated thief, who works for Chinnoy Seth. Raja falls in love with Meena (Sadhana) and decides to give up the life of crime. To his dismay he realises that she however intends to marry Ravi, who is a family friend. On the night before their engagement he decides to kill Ravi only to realise that he is his long lost brother. In the mean time Meena's parents decide to break off the engagement on discovering that Ravi is of unknown parentage and religion.

Heartbroken, Ravi leaves his home after an argument with his foster parent's daughter Renu(Sharmila Tagore), whom he considers a sister, over her love affair with Vijay who is working as a driver for Chinnoy Seth. Renu has been in love with Vijay since their college days together but Vijay has not been able to find a suitable job in Mumbai despite having a BA degree. Laxmi has been diagnosed with cancer and Vijay takes up employment as a driver.

Raja hears about Ravi's problem and decides to reveal the truth about their relationship at a party organised by Chinnoy Seth. Chinnoy Seth's employee misbehaves with Meena at the party and Raja threatens to kill him. Later that night a drunk employee gets into a fight with Chinnoy Seth and in self-defence, Chinnoy Seth ends up killing the man. To cover up he decides to frame Raja and drags the body to Raja's house, hiding it in his closet. Vijay happens to witness this but is shut up with the promise of money for his mother's treatment.

Raja is arrested and Ravi defends him as an advocate, while Vijay initially testifies falsely and then revokes his statement. Lala Kedarnath Lala also appears in court as the witness who found Raja being caught by the police. Raja is ultimately proved innocent and Chinnoy Seth is convicted after he blurts out a confession in court, thanks to Ravi. Laxmi also arrives in the court to makes sure Vijay did the right thing.  Lala Kedarnath appears back in the court and the family fully reunites. In the end, Lala Kedarnath and the rest of the family build a new home, and also place Meena's family and Renu's family in the home.