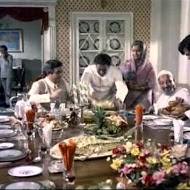 Through hard work, Anand Narayan starts on his way to success. He has a daughter Kamala, and sons Madhu and Govind.  He meets with Nekiram, who becomes his business partner, and also his samdhi (in-law) as his daughter is in love with Madhu. Both get married in a simple ceremony. After this marriage, both Nekiram, and Anand and his family work hard at preparing food in a small dhaba, which soon grows into a restaurant, then a larger fancier restaurant, finally a five star hotel.

Now Anand and his family are all wealthy and live in a palatial home. Suddenly,  Anand gets visits from Bhagwan Shri Kishan, and asks about him and his family. Anand proudly takes all the credit, and asks Kishan to accompany him to see his success and his hotel. Bhagwan Kishan declines, but agrees do so later. Then things start going bad  for Anand, when he finds out that Nekiram has been cheating him. Nekiram leaves the house, but Madhu accompanies him. Then Anand finds that Govind has been squandering money and on alcohol; and to top his disappointment Kamla gets pregnant. When Bhagwan Kishan comes to visit Anand again, he admits that he is a failure, his health is poor, and his family are all strangers to him. Lord Kishan advises Anand that this is the life and he must learn from the Mahabharat, and that every life is a struggle, which is confused by relations and near and dear ones, and also by one's ego. Once the ego is removed, then only one can see clearly his role in this world.

Blog being developed with great effort to make film lovers more aware and choose the films to watch based film collections under various themes. A curation of great utility to all including the developer of this blog.
Posted by Narayana Rao K.V.S.S. at 10:58 PM