Number 9 of the Year 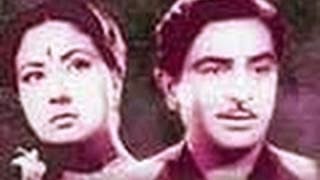 Chiranjeev (Raj Kapoor) is son of a rich man, Kashiram (Raj Mehra), and has three siblings: two sisters  and a younger brother. During a trip, his friend, Mohan (Om Prakash), falls ill and gets treated at an Ashram. At the ashram, Chiranjeev meets with Sharada (Meena Kumari). Chiranjeev and Sharada fall in love with each other, and he promises to return and marry her. On his way home he has an accident, and is treated by tribal people for a long period. He returns to the Ashram after that and  comes to know that  Sharada  married a wealthy old man. Chiranjeev is shocked,  returns home only to get another shock by realizing that   Sharada has married his own father. He finds comfort in alcohol. Sharada talks him out of this and makes him  marry  Chanchal (Shyama), from a reputed family background. But Chanchal finds that her husband and his stepmother had been in love before and complications arise.

Blog being developed with great effort to make film lovers more aware and choose the films to watch based film collections under various themes. A curation of great utility to all including the developer of this blog.
Posted by Narayana Rao K.V.S.S. at 5:11 AM