Number 2 of the year 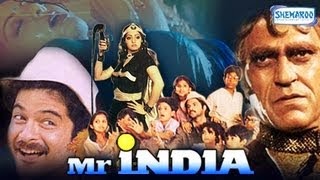 Arun (Anil Kapoor), a kind-hearted man who looks after orphaned children. Arun's guardian Prof. Sinha (Ashok Kumar) gives him a gadget that has the power to make the person wearing it invisible. Arun becomes the invisible Mr. India using the gadget and starts fighting crime from the city. A journalist (Sridevi) comes in contact with Arun and his orphaned children. They take up the fight against  Mogambo (Amrish Puri) an international don, as he wants the building in which Arun and children are staying. Finally, Mr. India helps capture Mr. Mogambo.

Mr. India as an invisible person. Sridevi is a journalist.


All Songs of Mr. India