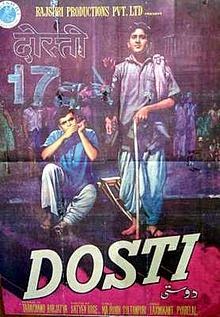 Number three of the year

Two friends, one blind live together by singing in the streets and sleeping on the roads. One of them starts going to school and leaves the other person. The boy left behind is a blind person. His sister also refuses to recognize him. But when the boy in the school needs money for school fees, the blind boy only pays that fees with income from singing even when he was sick. The film ends on happy note as all three come together.


All Songs in the film Dosti - Video