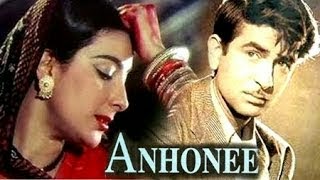 
Nargis played a double role in the film. Rajkumar Saxena, a tenant was told by the house owner's daughter, Roop, to pay his outstanding rent for over 6 months or face legal action. He approaches her father, Harnam Singh, who lets him live there for free and befriends him. He invites him to Roop's birthday party. Roop gets impressed when he sings there and invites him for dinner along with her father. Rajkumar Saxena, is an advocate and  is asked to represent a courtesan client, Mohini, who is facing eviction by her landlord. He finds her resemblance to Roop quite unusual and mentions this to her during their dinner. This news apparently shocks Harnam, who gets hospitalized and subsequently passes away. Mohini  claims to be Roop's sister. Roop decides to let Mohini move in with her and share the estate. But Mohini turns bitter and makes more demands including marriage to Rajkumar Saxena to which Roop obliges.

Nargis with a big bindiya