Kishore Kumar was born into the Bengali Ganguly family in Khandwa ( Madhya Pradesh) as Abhas Kumar Ganguly.  Ashok Kumar, an elder brother became a Bollywood actor. Kishore also got interested in films and music. In area of singing, he became a fan of singer-actor K. L. Saigal and tried to emulate his singing style.

He changed his name to Kishore and started his cinema career as a chorus singer at Bombay Talkies, where his brother worked. Kumar's first film appearance as an actor was in Shikari (1946), in which Ashok Kumar played the lead role. Music director Khemchand Prakash gave Kumar a chance to sing "Marne ki duayen kyon mangu" for the film Ziddi (1948). Kishore Kumar played the hero in the Bombay Talkies film Andolan (1951), directed by Phani Majumdar.

Kumar produced, directed, acted and composed the music for Jhumroo (1961), and wrote the lyrics for the film's title song, "Main Hoon Jhumroo". Later, he produced and directed Door Gagan Ki Chhaon Mein (1964). He wrote the script and composed music for the film, which is about the relationship between a father (Kishore Kumar) and his deaf and mute son (played by his real-life son (Amit Kumar).

In 1969, Shakti Samanta produced and directed Aradhana. He sang two songs in the film; "Meri Sapnon Ki Rani" and "Roop Tera Mastana". Kumar's two songs established him as a leading Bollywood playback singer of the time.

Kumar sang for Anil Kapoor in Kapoor's debut film as a leading man, Woh Saat Din and also recorded songs for Mr. India. He sang a duet with Alka Yagnik, "Tumse Badhkar Duniya Mein Na Dekha" for Kaamchor in 1982 and recorded some songs for the film Saagar with R. D. Burman.

On 13 October 1987—his brother Ashok's 76th birthday—he died of a heart attack in Mumbai at 4:45 pm. His body was taken to Khandwa for cremation. Kumar had recorded his last song, Guru Guru—a duet with Asha Bhosle for the film Waqt Ki Aawaz (1988) composed by Bappi Lahiri for Mithun Chakraborty and Sridevi—the day before he died.

Watch Hit and Super Hit Hindi Movies of Your Choice


Some Hit Songs of Kishore Kumar

More and Different videos of Kishore Kumar Songs are in 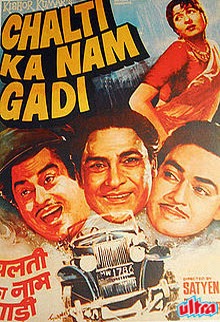