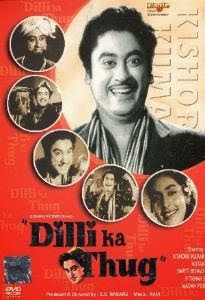 Kishore (Kishore Kumar) gambles and tricks people to make money. When his mother scolds him,  he finds a job in Mumbai. He meets Asha (Nutan) and starts wooing her.  Kishore's father and his friend were murdered by Anantram,  who wears a mask to hide his true identity in his nefarious activities. He is  also Nutan's uncle. The firm employing Kishore is run by Anantram and his two henchmen Sevakram and Bihari. They are making spurious drugs. Anantram goes to murder Kishore also in the hospital, but drops his monocle. It makes Iftekhar suspicious. He manages to take Anantram's fingerprints  and figures out the truth. There is a dramatic air-borne sequence, fight between Anantram and Kishore and shooting of Anantram by Nutan. Kishore has to handle airplane and   land the aeroplane as  the pilots lose consciousness.