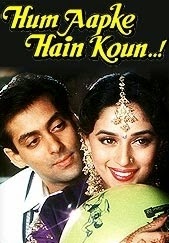 Rajesh (Mohnish Bahl) businessman, son of Kailashnath (Alok Nath), is an eligible bachelor. The family chooses Pooja Choudhury (Renuka Shahane) as the match for him, to which he agrees. Engagement and marriage ceremonies are done with enthusiasm and gusto. At these ceremonies, Rajesh's younger brother, Prem (Salman Khan) meets Pooja's younger sister, Nisha (Madhur Dixit). They fall in love. Pooja gives birth to a baby and dies. Rajesh is devastated. Both the families come to the idea that it will be beneficial  if Nisha marries Rajesh. Suddenly, relation ships are changing. Hence the title, Hum Apke Hain Koun (What Is My Relationship With You?). But in the end, Rajesh says, only Nisha and Prem have to marry.

6.14 millions 9.6.2014
The picture is a superhit film. Should reach 40 million views. When will it happen? More people have to know about YouTube and hindi movies on YouTube.


All Songs of the Film - Video Juke Box