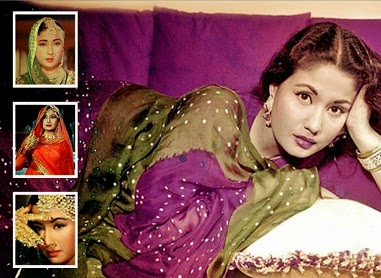 Meena Kumari  was born Mahjabeen Bano. She acted in firlms from her childhood to death for a period of 30 year and did more than ninety films.

She died due to liver cirrhosis in 1972.


Her father was a veteran of Parsi theater, played harmonium, taught music, and wrote Urdu poetry. He played small roles in films like Id Ka Chand and composed music for films like Shahi Lutere.

Her mother  was a stage actress and dancer, under the stage name, Kamini and is related to the well known Tagore family of Bengal.


Mahjabeen Bano started her acting career at the age of 7 with the name  Baby Meena. Farzand-e-Watan or Leatherface (1939) was her first movie. As an adult, her name became Meena Kumari and she acted  in mythological movies like Veer Ghatotkach (1949), Shri Ganesh Mahima (1950), and fantasy movies like Alladin and The Wonderful Lamp (1952).

Meena Kumari gained fame with her role as a heroine in Vijay Bhatt's Baiju Bawra (1952).  She became the first actress to win the Filmfare Best Actress Award in 1954 for this performance.

One of her best-known roles was in Sahib Bibi Aur Ghulam (1962), which was produced by Guru Dutt. Kumari played Chhoti Bahu, a wife, who takes alcohol to please her husband. The film was a major critical and commercial success. Meena Kumari's performance in the film is regarded as one of the best performances of Hindi Cinema.  In 1962, she had three nominations for Filmfare Best Actress Award, for her roles in Aarti, Main Chup Rahungi, and Sahib Bibi Aur Ghulam. She won the award for Sahib Bibi Aur Ghulam.


Meena Kumari performed successfully in Dil Ek Mandir (1963), Kaajal (1965), and Phool Aur Patthar (1966), all of which earned her Filmfare nominations, with Kaajal garnering her a fourth and last win of the Best Actress award.  Her subsequent releases, including Chandan Ka Palna and Majhli Didi did not do well.

Kumari's heavy drinking had badly damaged her liver, and in 1968 she fell seriously ill. She was taken to London and Switzerland for treatment.  Because of her heavy drinking, she deteriorated physically.  she  played  character roles in movies like Jawab (1970) and Dushman (1972).

She acted Gulzar's  directorial debut Mere Apne (1971). Kumari presented an acclaimed portrayal of an elderly woman who got caught between two street gangs of frustrated, unemployed youth and was killed, her death making the youth realise the futility of violence.

In 1969, Sunil Dutt and Nargis convinced the estranged Kaml Amrohi and Meena Kumari to complete the film Pakeezah started in 1964. Meena Kumari was gravelly ill. But showed determinatopm to complete the film.  Initially, after its release in February 1972, Pakeezah opened to a lukewarm response from the public; But, after news of  Meena Kumari's death less than two months later, people flocked to see it, making it a major box-office success. The film has since gained a cult and classic status.


Death
Three weeks after the release of Pakeezah, Meena Kumari became seriously ill, and died on 31 March 1972 of liver cirrhosis.


Story of Making Pakeezah by Vinod Mehta - An extract in Outlook
http://www.outlookindia.com/article/Her-Story/287253