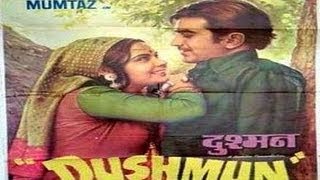 Due to the fault of a driver (Rajesh Khanna), the bread winner of a family dies and the family goes into problems. The driver is sent to the village by the judge and starts helping the family even though the family despises him.

Surjit Singh (Rajesh Khanna) is a rash truck driver and also drives in drunken state. One day he is driving  at breakneck speed in thick fog in a drunked state, and ends up killing a farmer named Ram Din. He stays at the scene and is arrested by the police, charged, and brought to  the court.

The Judge (Rehman) weighs the plight of Ram Din's family ( his widow Malti (Meena Kumari); his sister Kamla (Kumari Naaz); two young sons; a crippled father and  blind mother), and his  belief that imprisonment does not serve the good of the victim or the perpetrator. He comes out with the idea that  Surjit has to live with Ram Din's family and lookafter their financial needs. Surjit argues against it but he is transported to the village and house of Ramdin. Ram Din's family calls him "Dushman" . Surjit attempts to escape on the first night, but is brought back by the police.

He slowly realizes his duty and  starts sincerely working for helping the family. He meets Phoolmati (Mumtaz), who operates a small bi-scope machine to entertain the village kids. Their relation  blossoms into love. He also finds friends among villagers. He works hard on the family plot. He also comes to know evil designs of a local landlord and thwarts his attempts.

Surjit arranges the marriage of Kamla with her childhood friend.  He helps villagers who have mortgaged their land with the landlord. Malti is still very angry with him.

Surjit is framed and arrested for the death of Phoolmati's grandfather. The landlord gets  Phoolmati kidnapped. Malti, who has been working in one of the landlord's saw mills, witnesses his misdeeds, rescues Phoolmati but gets trapped herself.  Meanwhile Surjit stages an escape  and with the help of Phoolmati, is able to come to Malti's rescue. He fights with the landlord and teaches him a lesson.  The police show up and arrest the landlord. .

Malti finally accepts Surjit and arranges his marriage to Phoolmati. His two years' imprisonment is complete, and the Police to escort him back to town. Surjit pleads with the Judge to let him serve a life sentence in the village with the family and the Judge smiles, satisfied that his idea  has been successful.

The movie is also made in Telugu with Shobhan Babu with the title Khaidi Baabaay. I saw it first in Telugu.when it was released.