Number One of the Year 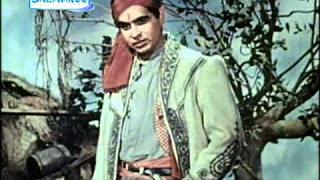 Emperor Maharaj (Murad) has a brother Shamsher Singh (Premnath) and sister Rajshree (Nadira). A local village leader named Jai Tilak (Dilip Kumar) enters a contest to tame Princess Rajshree's horse and after he is successful Shamsher challenges him to a game of fencing. Jai is declared the winner of the fight after much dispute and Shamsher is enraged at losing to a poor villager. Jai then falls in love with Rajshree and tries numerous times to woo her but the arrogant princess does not reciprocate it. .

Shamsher becomes  enraged when the Emperor Maharaj reveals that Shamsher is not the heir to his throne after his death and that he plans turn the kindom into a democracy.

Shamsher plans to gain control of the kingdom by killing the Maharajah on the night before he is due to travel to England for a medical procedure. The Maharajah escapes the attempt on his life by disguising himself as a servant in his own palace.

Mangala, a girl of Jai's village is kidnapped by Shamsher Singh.  Mangala takes a bottle of poison and dies. Jai kills Shamsher in revenge. This provokes Princess Rajshree to launch an attack on his village to avenge her brother's death. Jai manages to kidnap Rajshree and sets out to gain her love by taking her into his village and forcing her to live as a peasant girl. Just when Rajshree begins to realise her feelings for Jai, Shamsher Singh who was presumed dead returns and starts fight.
_______________

A blockbuster movie of the time.

Hit and Superhit Hindi Films - Full Movie Videos  on YouTube and Yahoo
Posted by Narayana Rao K.V.S.S. at 4:55 AM