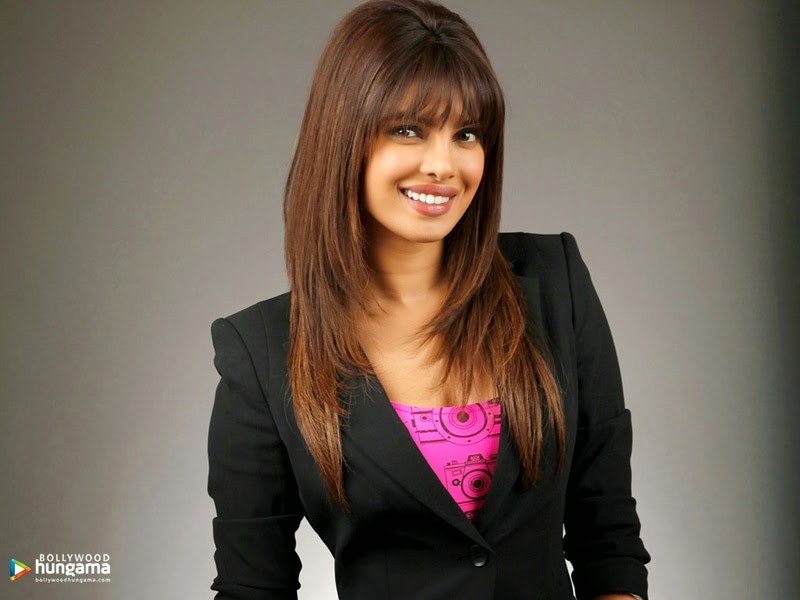 Priyanka Chopra (born 18 July 1982) is an Indian film actress. She was the winner of the Miss World pageant of 2000. Chopra has become one of Bollywood's popular actresses. She has received numerous awards and nominations, including a National Film Award for Best Actress and Filmfare Awards in four categories.


In 2003, Chopra made her Bollywood film debut as the second female lead opposite Sunny Deol and Preity Zinta in Anil Sharma's The Hero: Love Story of a Spy. The Hero was a successful Bollywood film in that year. Later that year she appeared in Raj Kanwar's box-office success Andaaz (No.9 of the year) with Akshay Kumar.

Chopra's first three releases in 2004—Plan, Kismat, and Asambhav—performed poorly at the box-office. Later that year she starred with Salman Khan and Akshay Kumar in David Dhawan's romantic comedy Mujhse Shaadi Karogi, which became the fourth-highest-grossing film of the year in India  earning 57 crore rupees  globally.


In 2006, she had special appearances in three films.  Chopra starred in Rakesh Roshan's superhero film Krrish. Chopra played a young television journalist who schemes to take advantage of an innocent young man with remarkable physical abilities, but eventually falls in love with him. The film was the second-highest-grossing film of the year in India and grossed over 117 crore rupees.  worldwide. The  next film was Dharmesh Darshan's romantic comedy Aap Ki Khatir, co-starring Akshaye Khanna, Ameesha Patel and Dino Morea. Chopra's final release of 2006 was Farhan Akhtar's action-thriller Don (a remake of the 1978 film of the same name), with Shahrukh Khan. Chopra portrayed Roma (played by Zeenat Aman in the original film), who joins the underworld to avenge Don for killing her brother.  The film was a box-office success in India and overseas, with revenues of 105 crore rupees.

In 2007, Chopra had two leading roles. Her first film was Nikhil Advani's Salaam-e-Ishq: A Tribute to Love, a romantic comedy in six chapters with an ensemble cast. She was featured opposite Salman Khan in the first chapter as Kamini, an item girl and aspiring actress who tries to land the lead role in a Karan Johar film with a publicity gimmick.Salaam-e-Ishq: A Tribute to Love was not successful at Boxoffice. The second film,  Big Brother, was also not successful.

In 2008, Chopra starred opposite Harman Baweja in his father's Love Story 2050. She next appeared in the comedy God Tussi Great Ho, portraying a TV anchor opposite Salman Khan, Sohail Khan and Amitabh Bachchan.  Chopra next starred as a kindergarten teacher in Chamku opposite Bobby Deol and Irrfan Khan, and played the role of Sonia in Goldie Behl's fantasy superhero film Drona opposite Abhishek Bachchan and Jaya Bachchan.


The string of poorly received films ended when Chopra starred in Madhur Bhandarkar's Fashion, a drama about the Indian fashion industry which followed the lives and careers of several fashion models. Chopra portrayed the ambitious supermodel Meghna Mathur

Both the film and her performance were appreciated by critics, and earned Chopra several awards, including the National Film Award, the Filmfare Award, the IIFA Award, the Screen Award, and the Apsara Award for Best Actress.  The film had net earnings of  rupees 60 crore  and was a commercial success despite being a women-centric film and the absence of a male lead.


Chopra's final film of 2008 Tarun Mansukhani's romantic comedy Dostana, with Abhishek Bachchan and John Abraham. Set in Miami, the film tells the story of a friendship between her character and two men who pretend to be gay to share an apartment with her. Chopra played a stylish young fashion-magazine editor Neha, who is trying to deal with professional pressures in her life. Produced by Dharma Productions, the film was a financial success with worldwide revenues of over rupees 86 crore.

The following year Chopra played a  Marathi woman named Sweety in Vishal Bhardwaj's caper thriller Kaminey (co-starring Shahid Kapoor), about twin brothers and the journey in their life in a span of 24 hours linked with the underworld. The film was successful at the box-office with the worldwide gross earnings of rupees 71 crore.  Chopra subsequently appeared in Ashutosh Gowariker's romantic comedy What's Your Raashee?, based on the novel Kimball Ravenswood by Madhu Rye. The film depicts the story of a US-based Gujrati NRI in search of his soulmate among 12 girls (all played by Chopra) associated with the 12 zodiac signs.

In 2010 Chopra starred with Uday Chopra in Jugal Hansraj's  Pyaar Impossible! as Alisha, a beautiful college girl (and later a working mother) who falls in love with a nerdy boy. Later that year, she co-starred with Ranbir Kapoor in Siddharth Anand's Anjaana Anjaani,  the story of two strangers, both trying to commit suicide, but eventually fall in love with each other. The film was a moderate commercial success.


Her first film of 2011 was  Vishal Bhardwaj's black comedy 7 Khoon Maaf based on the short story "Susanna's Seven Husbands" by Ruskin Bond. The story 7 Khoon Maaf centres on Susanna Anna-Marie Johannes, an Anglo-Indian woman (played by Chopra) who murders her seven husbands in an unending quest for love. Chopra's final release of the year saw her reprising her role as Roma in the second part of the Don film series, Don 2. Although the film received mixed reviews,[98] Chopra's performance earned positive feedback from critics.  Don 2 was a major success in India and overseas, earning over rupees 206 crore.

Chopra's first film of 2012 was Karan Malhotra's action drama Agneepath, in which she starred with Hrithik Roshan, Sanjay Dutt and Rishi Kapoor. Produced by Karan Johar, the film is a remake of his father's 1990 production of the same name. The film's worldwide gross was rupees 193 crore.  Chopra next co-starred with Shahid Kapoor in Kunal Kohli's romance, Teri Meri Kahaani.


Anurag Basu's Barfi!, with Ranbir Kapoor and Ileana D'Cruz, was her final appearance of 2012. Set in the 1970s, the film tells the story of three people, two of whom are physically disabled. Chopra played Jhilmil Chatterjee, an autistic woman who falls in love with a deaf, mute man (Kapoor). The film was a major commercial success, earning rupees 175 crore  Chopra received unanimous praise for her portrayal, which several reviewers regarded as her best performance  Don 2, Agneepath and Barfi! are part of 100 crore club of bollywood films.

Chopra's first release of 2013 was K. C. Bokadia's Deewana Main Deewana.  She did a special appearance in Shootout at Wadala in a song called "Babli Badmaash Hai", which was her first item number.   She played an NRI girl in the Apoorva Lakhia's Zanjeer, a remake of the 1973 Hindi film of the same name. The film was a failure.

Mary Kom, a biopic of world boxing champion and Olympic bronze medalist Mary Kom is releasing on 5 September.   Chopra is filming Zoya Akhtar's Dil Dhadakne Do, a family drama alongside Farhan Akhtar, Ranveer Singh and Anushka Sharma. She is also acting  as Kashibai in Bhansali's period romance Bajirao Mastaani, alongside Ranveer Singh and Deepika Padukone.She is producing and acting as a dancer-turned-politician in Bhandarkar's drama Madamji.

Blog being developed with great effort to make film lovers more aware and choose the films to watch based film collections under various themes. A curation of great utility to all including the developer of this blog.
Posted by Narayana Rao K.V.S.S. at 9:06 PM