Hanuman is a param bhakt of Shri Ram. But still conditions are created in a such a way that Hanuman agrees to protect a person whom Ram wants to punish. Hence Hanuman has to fight with Ram to protect his commitment. 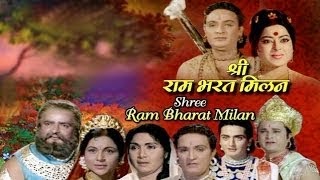 Story of Bharat going in search of Shri Ram, his brother who went to forests to live for 12 years as per the wishes of his father. Bharat was asked to become the Prince in the absence of Ram. But Bharat refuses to accept it and goes in search of Shri Ram. He meets Shri Ram and requests him to come back to Ayodhya and become the Prince, actually King as Dasarath died in the mean time. But Ram does not accept, and sends Bharat back telling him that for him, father's wishes are supreme and he has to honour them and stay in the forest for twelve years. Bharat takes his footwear (Ram padukas) and places them on the simhasan and rules Ayodhya till Ram goes back.