Rekha has acted in over 180 films in a career that has spanned over 40 years. She has often played strong female characters. .

She has won three Filmfare Awards, two for Best Actress and one for Best Supporting Actress, for her roles in Khubsoorat (1980), Khoon Bhari Maang (1988) and Khiladiyon Ka Khiladi (1996), respectively. Her portrayal in Umrao Jaan (1981) won her the National Film Award for Best Actress. 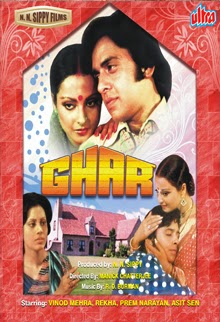 Blog being developed with great effort to make film lovers more aware and choose the films to watch based film collections under various themes. A curation of great utility to all including the developer of this blog.
Posted by Narayana Rao K.V.S.S. at 4:32 AM