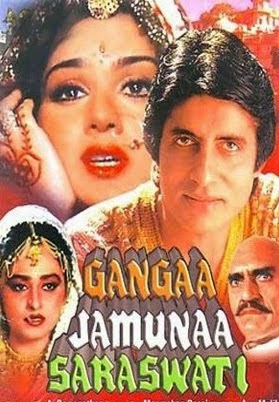 Thakur Hansraj kills his brother-in-law and through false means takes the signature of his sister Bharati Devi on the property papers  transferring the entire property to him. When Bharti Devi learns that all property of her was transferred to her brother, she gets very angry. Her son, Ganga takes a pledge that he will one day take revenge on Thakur at the same place.

Ganga becomes a truck driver who transports goods. Jamuna jumps on the truck one day to save herself from Bheema who is after her. Ganga has to stop the truck as the road ahead is blocked. It starts raining heavily and the  staying place nearby is given only  for honeymoon couples. Ganga and Jamuna  pretend that they are a couple and take the room. The next day, when Bheema comes to take Jamuna away forcibly, Ganga fights with him. Jamuna falls in deep ice and to revive her Ganga embraces her for quiet some time and this lead to their union.

Ganga is arrested for beating up Thakur's son and is jailed for two years. When he returns, Thakur sends his person to kill him. A blast takes place at the bridge and Jamuna and their child fall into the river. Ganga gets hold of his child but cannot find Jamuna. Jamuna reaches the home of Shankar who fell in love with her the first time he saw her during one of his qawaali programmes. Jamuna has forgotten her identity. There also is the involvement of Saraswati who loves Ganga. Ganga finally meets Jamunaa and they unite once again.