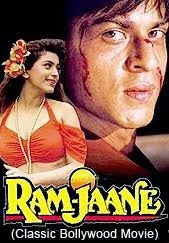 Story : A child requests a priest to make him aware about his name, religion, and parentage. The priest answers "Ram Jaane" (God knows). The child accepts Ram Jaane as his name. He grows up to be a thief, a criminal, and ultimately a gangster. He is in love with his childhood sweetheart, Bela, and believes that she too loves him. When other gangsters decide to take-over the building in which Bela lives, Ram decides to oppose them, to impress Bela.  Ram antagonizes the gangsters and ultimately finds out that Bela dislikes him and wants to marry some other man. What happens next?