Amar, Malti, and their young son, Raja, live a middle-class, but very harmonious life. Both Amar and Malti were brought up in an orphanage, and are always ready to help other orphans. Amar works for a kind-hearted and generous employer named Prakash Mehta, who is envious of their lifestyle, and would himself like to get married. Then one day Amar intercepts some criminal activity, which results in two employees losing their jobs, with one ending up in prison. When the prison term gets over, he runs over Amar under his truck, killing him instantly. Devastated and heart-broken, Malti hides this news from Raja and tells him that Amar is hospitalized and unable to return home. Then the towns folks start linking her with Prakash, leading to rumors being spread about their intimacy, finally resulting in Prakash proposing to her and both getting married. This settled, the two hope that life will continue and wounds will heal. But Raja expects his dad to return home, starts hating Prakash - so much so he harbors thoughts of killing him. And then one day Raja gets hold of a gun - and this time he will make sure that he kills Prakash - who he blames for his parents' separation. 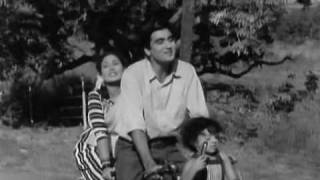