In India, the film grossed a record of over Rs.12 million. This record was later beaten the next year by Aan.

It was entered into the 1953 Cannes Film Festival, where it was nominated for the Grand Prize of the Festival.

In 2003, Time magazine included it in a list of "10 Indian Films to Treasure". Time magazine also chose Raj Kapoor's performance in Awaara as one of the top ten greatest performances of all time. In 2005, Indiatimes Movies ranked the movie amongst the "Top 25 Must See Bollywood Films." 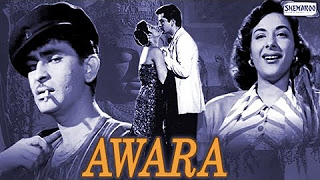 Judge Raghunath, a district judge convicts Jagga, son of a criminal, of rape on little evidence. The judge believes that "good people are born to good people, and criminals are born to criminals." Jagga later escapes and kidnaps the judge's wife Leela for revenge. He releases her after four days.  The judge accuses  Leela and throws her out of the house.

Their son Raj and she  live in poverty as a result of being estranged from the father. Raj befriends Rita in school, but he is removed from the school rolls. Rita moves to another city.  On the streets, Raj turns to a life of petty crime and Jagga helps him to become a talented criminal.

Raj meets Rita,  now a ward of the Judge and they realize that they are the same childhood friends, and  fall in love. Raj tries to quit his life of crime, but his employers fire him when they find out that he was a thief.

Raj goes back to Jagga for a money loan, but Jagga wants him to commit more crimes. Raj steals a necklace from a man he meets on the street and gives the necklace to Rita for her birthday. She discovers that he is indeed a thief. Rita goes to Raj's mother and finds out the whole truth about his life.

When Raj realizes that Jagga is responsible for his mother's misery, he kills Jagga in a fit of rage. At his trial the judge in the case is Raghunath. Rita persuades him that Raj acted in self-defense.  Raj learns that the judge is his father and he escapes and attempts to kill him. Raj is brought to another court, and is defended by Rita. In the end, Raj is sentenced to 3 years in prison for his crime. Rita promises to wait for him.