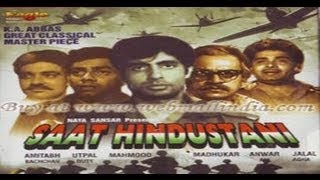 A Muslim poet Anwar Ali (Amitabh Bachchan) hails from Bihar and five other men, all belonging from different religions and different parts of India join their seventh comrade Maria (Shehnaz), a native of Portuguese-occupied Goa, to raise nationalist sentiments in that state by hoisting Indian flag on Portuguese forts and buildings


The film is Amitabh Bachchan's debut movie. He left Calcutta on 16 February 1969 for Bombay to act in this film.