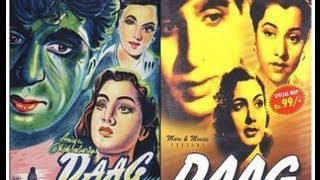 Shankar (played by Dilip Kumar) and his mother live with money,  he makes by selling mud toys. He is unable to meet the needs and his debt starts rising higher and higher and he gets addicted to alcohol. He is attracted to Parvati (Nimmi), who also lives a poor lifestyle along with her step-brother, Jagat Narayan, his wife, and their daughter, Pushpa. After an argument with his mother, Shankar departs to the city, gives up drinking, earns a lot of money. He then returns home and pays off his mortgage. In the mean time, Parvati family become rich due to inheritance from a relative.Shankar proposes to marry Parvati, but he is  told that Parvati's marriage has been arranged elsewhere. Broken, he starts drinking again and his mother also dies at this stage. Now he again starts drinking heavily and start walking on the path of self-destruction. Parvati's love can save his life and she is also willing, but her parents are of the view that drunken Shankar can never become a good man in life. In dramatic turn of events, a happy ending results.